This is great as a dessert for anyone that suffers from intolerances such as Dairy or gluten.  Hell, it’s a great dessert anyway!  There’s a plethora of flavour options; coffee, pink grapefruit, lemon & lime etc.  We’re celebrating the Jamie Oliver Food Revolution Ambassador program’s 2nd Birthday with this one!

As we are in the prime of Blackberry season in the UK, here’s an almost free recipe that’s a perfect little treat.

Blend about 300g of freshly foraged blackberries with a dash of water and the juice of half a lemon.

Make a sugar syrup by heating 150g of sugar in 300ml of water until it dissolves.  Strain the blackberry juice and mix it with the sugar syrup in a metal tray. 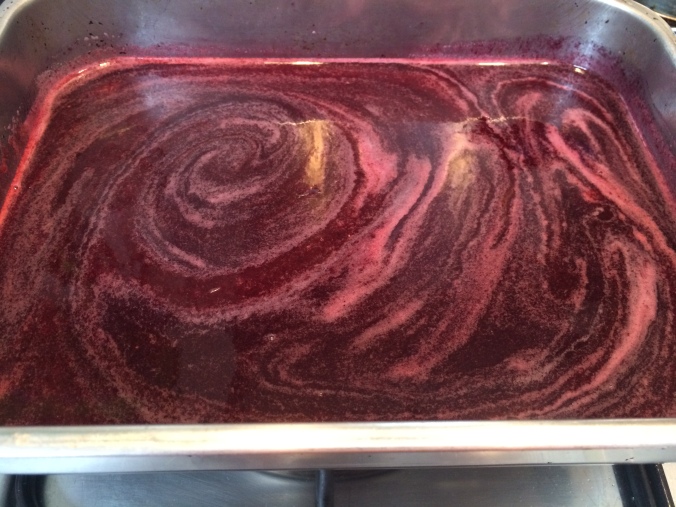 Pop the tray in the freezer and then simply run a fork through it every 30 minutes until you have a crystalline consistency.

You can store the granita in Tupperware in the freezer for ages and dip into it whenever you need an autumnal fix.

The concept here is that they’re a great alternative to the sugary lollies you’ll find in the shops.

As per usual we’re not entirely prepared, but hey, life’s like that so we just have to make do with what’s to hand.

These aren’t something that we would normally eat, let alone make, but that just makes it more fun and to be honest, one of the greatest pleasures in cooking is the satisfaction and feeling of accomplishment you get from doing something new.

Hurdle number 1, no lolly moulds.  Kids, do me a favour and eat a couple of Petit Filous yoghurts for me. (no argument there).  Big thanks to Waitrose Café for the coffee stirrers aka lolly sticks…

The recipe we used is below and I have to say that these are so very simple, that they’re easier than taking two children out to the shops to buy some!

It’s really heart-warming when the younglings’ first question is “are these healthy”.  Bless.

Blend it all up until silky smooth, pour into moulds and then pop them in the freezer.  After 10 minutes or so, add the sticks and then return to the freezer for 3 hours.

I think that next time I would go with the blueberry option as I found them a little tart, although the children thought they were great.